Another Long Term Investment at Tomrods

Brexit Deal or No Deal

Tomrods Celebrates 40 Years in Business & Looks to the Future 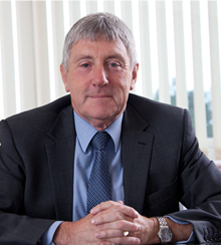 Tomrods, which is based in Thirsk at a nine-acre multipurpose site, has a group turnover of £75 million, £20m of which is generated by Tomrods. The company has grown 20 per cent so far this year and has combined group sales of over 100,000 tonnes, with the group now employing over 100 people. John Thompson established Tomrods Steel Stockholders in 1973 from his bedroom in Harrogate, with just a phone, desk and a £50 overdraft. In the first year Tomrods’ turned over £100,000 and Thompson puts his success down to common sense and hard work.

He said: "When I started Tomrods in 1973 I was only 23 and I had to learn fast so that we survived those critical first few years. I ran the business using common sense – not spending money we didn’t have, treating all our customers, suppliers and employees with the same respect and working hard." Tomrods, which employs 40 staff, offers an all-service package ranging from sawing, shot-blasting, primer painting, cutting and drilling, in addition to its wide stockholding capabilities. The company has grown gradually over 40 years through acquisition and the launch of sister companies. Despite the firm’s global reach, Thompson believes a northern base is crucial for Tomrods, due to a large proportion of steel businesses and steel fabrication remaining in the North East of England.

The company’s North Yorkshire base enables easy access to all customers in the North as well as to the Humber ports. A fleet of eight wagons deliver daily into all of these areas providing a ‘just-in-time service' to all the company’s UK and European customers. Thompson believes that the company is only as good as its staff. There is a continuing professional development policy and all staff are encouraged to go on courses to enhance their skills and keep up to date with advances in best practice. Tomrods is a Yorkshire business at heart and is supporting the local area economically through employment and by using local services. The company also supports and raises money for local charities and other worthy causes such as The Yorkshire Air Ambulance and Candlelighters children’s cancer charity. Tomrods will mark its 40th anniversary on Saturday with a special Open Day at the Thirsk site for employees, their families and customers, and a VIP charity golf day at Rudding Park on October 11.